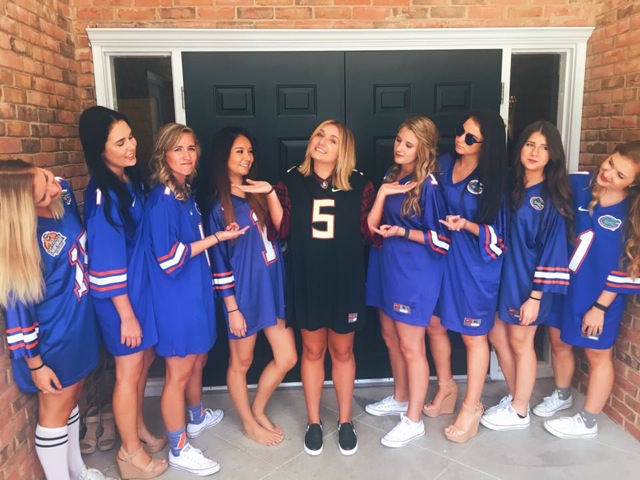 If you grew up in Florida, you have likely encountered the rivalries of Florida State and University of Florida. The Seminoles and Gators are an example of an innate hate for another team that is inherited for some at birth and others when they chose the school they will attend. Whichever sports team you support and for whatever reason you support it, having a loyalty to a team makes being a sports fan so much more enjoyable.

The rivalries reach beyond the field and manifest themselves in behavior at places like the grocery store, where it’s common to share a meaningful nod with the person strolling by you on the cereal aisle who’s also wearing a Gator t-shirt. Growing up, my dad loved saying “Go Gators!” to anyone in clad in Gator (or Seminoles, for the opposite effect) gear. He used to tell me stories about Mr. Two Bits and sang gator chants to my brother and me. I grew up in a culture of friendly rivalry and pride to be a Gator. When I became a Gator, it strengthened my bond with my dad and added even more meaning to the football chants and the colors, orange and blue.

Between my brother and me, our rivalries showed through our favorite soccer teams, a sport we both love to play and watch. Being the younger sibling, I wanted to be different and prove I could think for myself. So, when my brother proclaimed his favorite English Premiere League team was Manchester United, I began my search for a team I could call my own. I eventually decided Tottenham Hotspur would be my team, and although traditionally the Manchester and North London teams are not considered rivals, we created our own personal competition anytime they played.

Whether you were born into a rivalry, chose it in spite of your sibling or just wound up in the middle of one somehow, a rivalry can bring out all the best aspects of sports culture. The highs of competition, celebration and camaraderie among other fans are even more extreme, and the lows of disappointment and loss hurt even more with pride and bragging rights at stake.

In my family, rivalries and team pride can bring you closer to someone who you share a passion with, or add a new dimension to an ongoing sibling rivalry.

Breathe new life into your routine

By Jessica Curbelo Wake up. Brush your teeth. Get dressed. Go to work. Do work. Go home. Have dinner. Watch TV. Go to bed. Repeat. When was the last time you strayed from your routine? I get it: rent has to be paid, so work has to be done. There are parts of life we […]

Swamp Talk: How to Reduce Stress Before Finals

By Chelsea Perry Finals are just around the corner. With the end of the semester rapidly approaching, it’s easy for us to become overwhelmed with everything we have on our plates (other than the turkey and stuffing, of course). Whether it’s studying for finals or writing papers, the holiday season can prove to be an […]

Swamp Talk: The Dos And Don’ts of Getting Inked and Having Tattoos

By Brock Seng You’re in college and you’re ready to get a tattoo. Your parents aren’t around anymore. Who’s going to stop you? No one. It’s time to get inked. So, you walk into the shop and there are big burly guys everywhere. They’re covered in tattoos from, literally, head to toe. They have chains […]

1,678 thoughts on “Rivalries Bring People Together (And Apart)”